Thanks to our friends at Culture Spot MC. You can read the article on their site and find more arts and humanities news and events in Montgomery County. 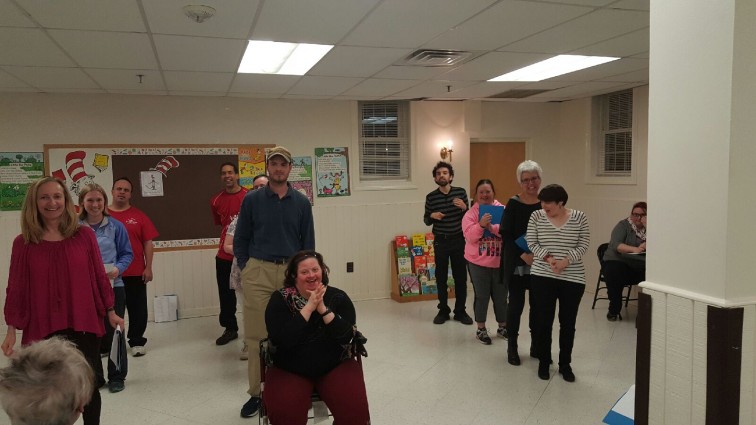 Photo Credit: Mehdi Raoufi
Actors line up to rehearse the number ‘On This Mysterious Isle’ in Marooned 5-0

When it comes to traditional theater, actors are chosen for specific roles written into a completed script. The process is anything but conventional for ArtStream’s Inclusive Theatre Companies, which feature thespians with intellectual and learning disabilities and autism spectrum disorders. Here, the actors help come up with both their characters and the script.

After months of collaboration, the group’s hard work will come to the stage in two original plays, “Marooned 5-0” and “It’s About Time,” from April 28 to May 1, at the Jewish Community Center of Greater Washington in Rockville.
“Everything is collaborative,” said Mehdi Raoufi, teaching artist, sound designer and director of “Marooned.” “We have people bring forward ideas, and we have a lot of brainstorming sessions in the early parts of our rehearsals where people will think about themes and characters that may fit into those themes. And we basically write it together through improv scenes and exploring the different ideas our actors are coming to rehearsals with.”

Julie Bain Miller, actress and director of “Time,” said those involved with forming the production get to know everybody as an individual and discover their stage strengths, including finding their connection to characters and areas where they shine. “The biggest thing that helps us out as directors is the model” for creating a play. “We don’t pick what the show is about,” she said. “The actors pick. In many ways, they get to design their own characters, so they give us a bunch of material to work with, and we have the job of shaping it into something that highlights their strengths.”

“Marooned,” which has a “Gilligan’s Island” theme, is the story of a group of people who signed up for a Groupon whale watching tour only to have their vessel sink, leaving them stuck on an island with mer-people (mermaids and mermen) and pirates. “I think it is a funny show…lighthearted,” Raoufi said. “Sometimes people just need an escape and something fun to go to. I think our show really provides a fun escape.”

Many of the actors involved with both productions have been with ArtStream, a nonprofit dedicated to providing adults with disabilities creative and performance opportunities, for many years. “Every year, they are working on their skills in public speaking and performance and memory, so it becomes a social activity they look forward to that they don’t always get,” Raoufi said. “More importantly, we are providing a space where they can be creative and their ideas are valued right from the get-go, so they feel confident by the time we get to the stage that this is something they can do, and they have done it a few times. They have seen they have the capability to perform.”

Bain Miller believes that everyone needs a place where they feel they belong and are great at what they do. “That (space) is not always provided to adults with special needs, but everybody in our group, they love doing theater,” she said. “They are psyched about it and they have this place of belonging now.”

“Time” is a musical comedy about detectives chasing a prankster through time and space. The time travel element is Bain Miller’s favorite aspect of this play. In every production, she notices “that the best ideas don’t come from me. They don’t come from the staff. They come from the actors because they are not really limited in their thinking the way that I think a lot of us are.” Everyone challenges each other, “actors, staff, volunteers …We all push each other outside of what we would get in a normal theater situation.”

Each performance is full of joy and people having fun doing a craft they adore, Raoufi said. “It is such a supportive, loving (event) that people come to me and they are like ‘I can’t even do half the stuff I have watched them do on stage’,” he said. “You will be blown away by the talent of each individual that’s on stage,” he promised.

Sometimes people come to the plays with a preconception of what someone with an intellectual or physical disability can do, Bain Miller said. “Our actors just blow that out of the water. …These (actors) are phenomenal. Challenge yourself and your own beliefs of what you think people who are different than you can do.”